Maybe you’ve been counting down the days for the last three years and 11 months yourself. Or maybe your friends have been jumping around telling you how excited they are. But the most important tournament in the most popular sport in the world is finally upon us.

The World Cup is our quadrennial opportunity to exasperatingly wonder how countries like Chile, Switzerland and the Ivory Coast can possibly cultivate as much or more soccer talent from their tiny populations than the U.S. can from our 350 million people. So it’s a great time to grab a pint and belly up to the bar with other soccer fans.

For the folks who think CONCACAF is an aid organization, the World Cup is a 32 team, four week affair, which this year is being hosted in 12 cities in Brazil. For the next two weeks, there will be 3-4 games a day around 9:00am, 12:00pm and 3:00pm. So when your co-workers are late, take a 2 hour lunch, or leave early, they’re probably watching a match.

If you aren’t a soccer fan, don’t worry. The World Cup is the one time that even the snobbiest soccer fan will embrace a newcomer and try to introduce you to “The Beautiful Game.” But to help you out, here are a few talking points you can use that will help you out keep you from looking like a total newbie. Just memorize these, throw them out in conversation and let the others start debating.

1) You know, I think Neymar (pronounced NAY-MAR) may be better than – or at least as good as – Messi (pronounced Messy).
2) I love the Dutch, but do you think they are too old?
3) Columbia, Chile, Ecuador – I think they all have a chance. Who do you like?

If you haven’t watched a U.S. World Cup game yet, you should realize that more people than you expect will skip work for it. Remember the NFC Championship game when it was hard to find a seat for the Seahawks game? That’s probably a fair comparison. You may need multiple options for your viewing, in case one or more bars are packed to the gills long before kickoff. Here are some places we suggest trying.

1009 E Union Street, Seattle, Washington 98122
Physically unlike its Capitol Hill neighbors, AutoBattery is a sports bar inside of a former auto shop.  It features a garage vibe and 9 flat-screen televisions for sports watching. It’s hard to deny its claim as “Capitol Hill’s Best Sports Bar.” Call them at 206-322-2886 to check the World Cup crowd before heading over. 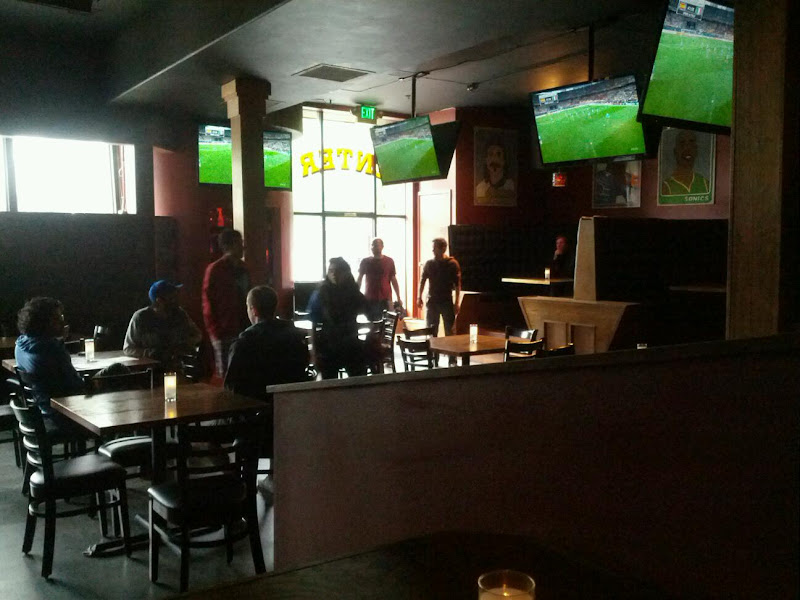 Summit Public House
601 Summit Ave E, Seattle, WA 98102
It’s a great neighborhood bar, and will be open for all the early games. As a bonus, you will have a chance to win soccer jerseys that they will be raffling off during the games.

Café Presse:
1117 12th Avenue, Seattle, WA 98122
It’s a French bar / café, not a traditional sports bar, but if you support France’s soccer team, this is the place to go.  It’s family friendly with Happy Hour pricing during every French Team Match and after Hours Happy Hour pricing during every Team USA Match. In fact, Trip Advisor named it one of the “10 Best Sports Bars in the U.S. to watch the World Cup”.

Will you get your World Fever on?

This entry was posted in Activities, Capitol Hill, Sports. Bookmark the permalink.